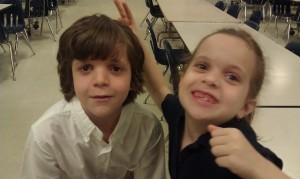 I haven’t posted in a few days.  My muse had left me, and I had nothing to say.  Very unusual for me.  I usually can write about SOMETHING.Then something happened in church today that made me say, “Well, there’s a blog post!”

Today at church, it was just me and the Little Monkeys, AKA The Middle Monkey and The Girl Child.  Monkey #1 was not feeling well, so he stayed home.

During the musical offertory (which the choir was not doing, so I was actually sitting WITH the kids), The Girl Child left to go to the restroom and when she came back to the pew, instead of letting her slide past me, I pulled her down on to my lap and started snuggling with her.  A very difficult feat these days – one that I know I won’t be able to do much longer – she is getting soooooo tall!  Not to be outdone, The Middle Monkey scooted over and put his head against my arm.  We were a tight little bundle of bliss, just letting the beautiful piano solo wash over us.

We stayed like that for a bit, when Middle whispers, “I love you, Mommy.” (in that sweet little lispy way)  I whispered it back to him.

Everyone all together now… AAAAWWWWWWEEEEEE!!!!!

Ever since they were little little, they have been the most volatile mix to have out together.  They are either FIGHTING or getting insanely silly together.  Even when they were 2 and 4!  But, I don’t think I have EVER heard them say they love each other.  Well, maybe when she was a baby and he would kiss her and say it, but not since then.  She is usually busy bossing him around and he is blaming her for everything (even this moring getting out of the car at church when he yells, “What did you do with my book?!? Oh…there it is.  I put it under the arm rest.”)  They are so free with their I Love Yous to me, but not to each other, so this was particularly heartwarming.

I whispered into the Girl’s head, “Did you hear what your brother said?”

And she did.  Very quietly.

“What did you say?” stage-whispered Middle Monkey.

And then The Middle Monkey with a little twinkle in his eye, states, “I heard you the first time.  I just wanted to hear you say it two more times.”

I nearly busted out laughing!  I literally was shaking with silent laughter.  It was such a big brother move!  He says it once – and then has her say it three times.  Priceless!  Where do they get these things?!?!

They both asked me why I was laughing.  I didn’t know how to put it.  I just told them to always remember to say I love you.  And to mean it when you say it.

By this time, the music was over, and the congregation was about to stand up, so, the Bossy Girl just said, “We have to stand up now.  Get up,” and climbed off my lap.  The moment was over.  Not sure when we will have a spontaneous moment like that again.  But, it sure was one I know I will remember for a while.

The Loves of My Life

I LOVE many things.  Chocolate.  The beach.  The feel of the summer sun on my shoulders.  Four-inch high-heeled shoes.  But of all the things I love now, and have loved in the past (any idea whatever happened to Shawn Cassidy?), nothing compares to the love I have for The Three Monkeys. As challenging and strong-willed as the three of them are, my love for them is unwavering.  They have served as great inspirations for my writing. I have written about each of them, at different points in their development, usually because I was particularly struck by something they had done.  This piece is one I wrote about Monkey #2 – The Middle Monkey.
Monkey #2, at 10 – almost 11), is the consummate middle child. He craves alone time. Who can blame him? Particularly being sandwiched in between The Asperger King and Princess Bossyboots.  They DEMAND so much attention, my little middle monkey will do what ever it takes to get someone to pay ANY attention at all to him.  And frequently, it is negative attention.  One day as I was about to lose my mind and all I could think about was just how IRRITATING he was being, I decided to “reframe” his seemingly aggravating habits, and make them endearing. Hence this piece.

Stuff
There is so much “stuffs” about you to love.

The way you talk endlessly about Pokemon.  And The Lord of the Rings.  And Transformers.  And Star Wars.  And…And…And…

The way you will fill the pockets of your coat with granite gravel just because it sparkled and you wanted to add it to your “rock collection,” which is in a pile by the door on the carport.

The way your thumb still goes up to your mouth when you are nervous – but you hold back slipping it in – and you check to make sure I am noticing.

The way you will read aloud from those silly joke books and then say, “I don’t get it.” Followed by, “OOOOOOOHHHHHHH!” after I explain it – for the hundredth time.

The way you love maps. And mazes. And LEGOS. And puzzles. Even if they are strewn about your bedroom floor.

The way you are so curious about everything around you. Yes, everything.

The way you put your shirt on backwards, or your shoes on the wrong foot, or wear two different ones, or have chocolate all over your face – and not really care.

But mostly the way you will, out of nowhere, look over at me and say in your sweet lispy way,
“I love you, Mommy.”